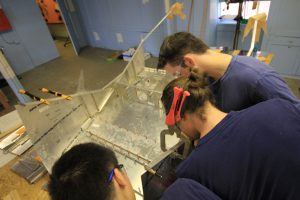 Student Aircraft Builders (SAB) is a student-led organization that has been building airplanes since 2013. The club came to fruition when a group of students who shared a passion for aviation decided to take on the challenge of building a full-sized airplane. Over the next year, these students were able to acquire all the resources necessary to start construction of a kit aircraft, the CH STOL Zenith 750. Collecting the initial resources was one of the largest obstacles faced by the founders and included a hangar in Willard Airport, a complete set of manufacturing tools from Aircraft Spruce, and all the parts necessary to complete the airframe.

While the initial motivation for starting this organization was to build a plane, the focus quickly moved to the educational potential of the project. The founding members realized how valuable this experience was and wanted to share it with others. Rather than completing the construction of airplanes with a small number of students as quickly as possible, SAB welcomed any student who was interested in the project to build with them. A training module was established so that anyone, regardless of prior skills, could take part in the project. Students from all disciplines of engineering joined the effort. The takeaway – they were no longer just building an airplane, they were educating future engineers. Through this, SAB has become a platform on which students develop real skills that can be leveraged in industry. Moreover, through the resource and human management demands of this project, students acquire the soft skills that are in high demand by employers. This concept has shaped our vision: through the design and construction of aircraft, SAB will stand as a source of inspiration and a vector through which students innovate, learn, and pursue their dreams. 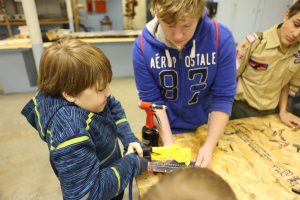 Since the origin of SAB, over 80 students have taken part in airplane construction. We truly pride ourselves in the number of students we have impacted in such a short time. Moreover, this isn’t the only project that we are undertaking. SAB currently has 40 active members working on 3 different projects. In addition to the projects, SAB also has a variety of sub-teams responsible for the marketing, business, student relations, and educational outreach of the club.