Over winter break, a Builder Bootcamp worked on the Zenith and made great progress! The firewall was completely assembled, and they began integration of the cabin frame. Unfortunately, there were alignment issues with it, and the team is currently working on resolving them. Once the cabin frame is ready, the landing gear will be able to be incorporated onto the plane.

A new rudder assembly was ordered to replace the current one. Because the rudder was often used as a demo for educational outreach, it has acquired minor dents and would not be optimal to use on the actual aircraft. The new rudder will be assembled when it arrives and new builder training has been completed. Many new tools were also ordered and will be utilized for future building sessions on both the rudder and cabin frame.

The design team is shifting gears from their previous aluminum semi-monocoque glider to an aluminum and cloth ultralight glider. The project proved to be challenging due to a lack of resources and experience, so the simpler cloth glider will allow members to gain experience and understanding before undertaking more difficult designs. The team has already acquired multiple ultralight glider designs that can be used as references. The team hopes to be well into the process of designing the glider by early May. 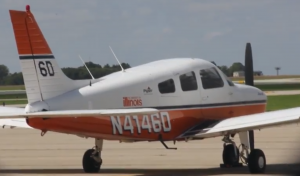 In December, SAB was selected as one of the finalists in Students with Drive! The premise behind the competition is to show Zipcar and Ford how the Zipcar product is being used to influence the community and make a difference. The initial submission video can be viewed here.

As a finalist, SAB received $500 of Zipcar credit for transportation to the hangar and another $2,500 in cash to make the final video submission that is due at the end of February. SAB will use the money to buy flight time and get aerial footage for the finalist video. Any leftover money will be put toward EOH to show off how amazing SAB is, and any money not used will go toward the Zenith. If SAB wins first place, we will receive $10,000 in cash and $5,000 in Zipcar credit. A $10,000 scholarship fund will also be established in the aerospace engineering department/College of Engineering in the club’s name along with Ford and Zipcar.